It has been very chaotic in Myanmar right now; peace process and ethnic minorities, Rakhine issues and other ineffective developments. Adding up to that, there have been signs that question the country’s transition towards democracy such as arresting journalists and suspending students. One could try catching up with the news but every morning one woke up, there would be another problem in the country. So yeah, it has been very chaotic.

It is inevitable for a country with immature democracy to be chaotic, especially where there is world’s longest civil war, internally displaced refugees, more than a hundred ethnicities longing for inclusiveness, gender equality, ongoing religious and racial conflicts. Myanmar sure does have countless problems to face, and not to mention, military being an institution itself; not part of the government.

Knowing bits and pieces of information, I understand that it is not easy to take a lead on this whole mess so I do not expect fast developments in a few years. However, the capacity of cabinet members and members of parliament is questionable so personally, I wish to see more effective decisions to be made in both legislative and executive powers. 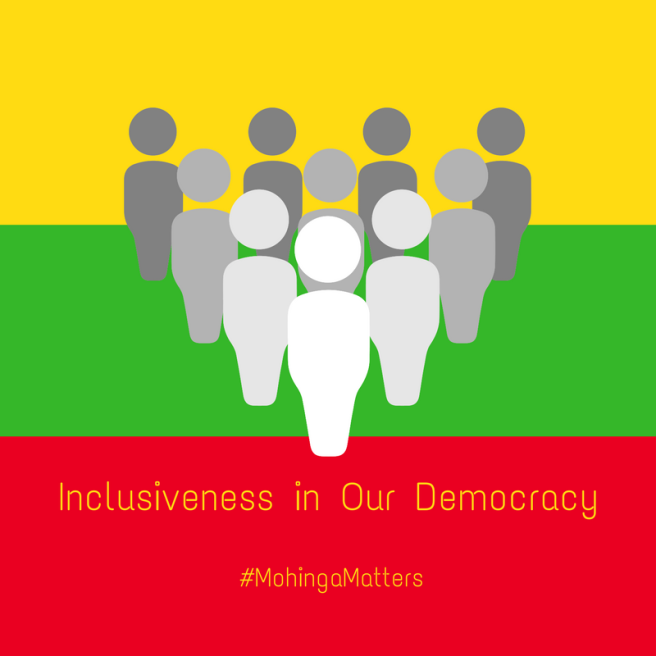 As I have mentioned above, our country has several issues going on, and “peace process” have been made the most important task to be done by the State Counselor herself. Nationwide dialogues have been held in different ethic groups and contexts. As the country briefly steps into democracy, many have helped raised voices from remote areas such as Kachin IDP camps, mountainous and disconnected Chin State, delicate situations in Rakhine and LGBT communities, people with various beliefs. While raising awareness for these groups to be included in national dialogues, in development operations, we have to really be careful about non-indigenous people who made majority of population in the country.

Highlighting and promoting the voiceless minorities to be heard could backfire when majority of normal Bamar people were ignored and blamed. Let’s look at the United States, the land of freedom with hundred years old democracy. While politicians like Obama and Clintons were trying to stand together with minorities, Donald Trump reached out to ordinary, white people who live in the farms. These ordinary white people might had had enough of politicians promoting minorities so they might have felt that Trump heard them out, Trump cared about them. Not to mention, mainstream media gave more than enough attention on him so these were the reasons why he got elected with majority of votes. (Disclaimer: I am not supporting white supremacy here; I am just trying to understand what had happened.)

By reflecting what happened in the US, it is wise for Myanmar to not neglect the major population. With Buddhists and nationalists rising, we should really be cautious with ethnic Bamar who are also struggling in country’s weak infrastructure, plodding developments in their daily lives. On the other hand, one should not forget the opposition party USDP and underestimate their moves. Before 2015 election, I was still working as a journalist so I heard concerns from various experts who were not convinced that NLD would win landslides victory because there had been deliberate use of religion to persuade Buddhists who made significant population in the country. Thus, one should really be aware of majority.

Inclusiveness means being able to include every different groups in the society. While I completely understand and truly care about untold, forgotten and unheard voices from remote parts of the country, I strong believe that the government, officials and CSOs should not forget about Buddhist Bamar people who are mostly neglected and often being portrayed as ignorant people. There will always be people with ill intention who would use Buddhists Bamar for their profit.

As time does fly real fast, I believe that we will have 2020 election again without realizing it. By learning others mistake, I hope that officials in charge do not ignore majority of population while raising awareness for remote and isolated part of the country and avoiding any ill-intentions cleverly. Amidst the chaos, may we wish our country be peaceful and prosper in the near future.

View all posts by theingilynn

We heard this morning that a security guard was severely wounded during a bomb blast outside the Myawady bank branch 1 in Mandalay. Myawady bank is one of the well-known military-owned businesses now boycotted by many and hence people queue up in front of its branches every weekday to withdraw their money. Since it’s a Sunday, there was no line of customers otherwise the bomb would have injured many more people
We woke up this Saturday morning praying that we would still have access to the world when the clock struck 9 this morning. We are grateful that we’re still here and darkness hasn’t descended upon us. That’s the thing… the fact that we all have to feel grateful that we somehow still have a partial right to information, or that we still have partial rights to everything that everyone is entitled to… that’s how the military junta have tried to normalize life for people of Myanmar for years.
Due to the various kinds of Internet shutdown, we were unable to collect and verify information but many netizens report that late night raids were still happening all over the country. Seven men in Lanmadaw Township, and four people in South Okkalar Township were abducted last night.
Day 67 since the illegal, cowardly and vile coup began. Yangon, which had suffered the most casualties among the peaceful protestors, have been relatively more quiet for some days now. The junta seems to think cracking the most populous and most internationally exposed city will win him the throne to the lands.
We reported a couple of times previously about the brave people of Tahan (Kalay) from Sagaing region who has set up protest camps and fought back junta’s forces with improvised firearms. This morning as early as 5 am, hundreds of terrorists ambushed the camp and dispersed protesters by using artillery shells and hand grenades which killed eight people from defense team and three civilians living close-by according to RFA Burmese.
We wished the rain stopped for our Karen sisters and brothers who had to hide under the bomb shelters in the woods. But the shower did not stop until the morning, and displaced Karen civilians continued to suffer from the shower of the junta’s airstrikes despite the army’s unilateral ceasefire declared on April 1, 2021, and around 20,000 civilians are in hiding and fleeing into Thailand.
Loading Comments...
Comment
×
%d bloggers like this: