Forever Alone (FA) has become one of the most popular terms among youths in Myanmar in recent years, and the percentage of FAs in Myanmar is quite significant too. Below are the types of FA I have observed in Myanmar.

(The author is an experienced FA and he is quite an expert on this subject. You can further contact him at zaweveralone@gmail.com if you would want to know more of his FA experiences.) 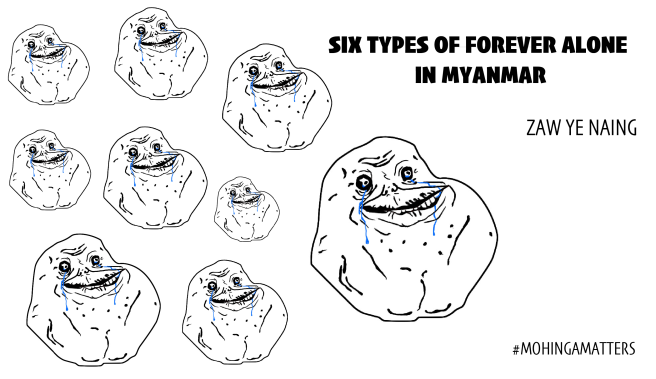 These FAs are the origin of the term Forever Alone. They are usually anti-social, extremely introverted, and socially awkward too. What memes describe their life is quite accurate to them too. The only missed phone calls they receive are from their mothers. Party is the place that they are the most unfamiliar with. They spend most of their time playing video games.

They need to get out more often, learn to become more sociable and make new friends. As their friend network expands, so is their chance of finding the one they are interested in.

These FAs tend to show how much they are feeling by sharing posts and songs, writing statuses on Facebook about how painful they are feeling right now. They have the most vulnerable heart. They are 24/7 feeling broken-hearted for no obvious reason. Although they might not even be clear to whom they are missing, they just like to feel. Regardless of what they are doing, they are at least feeling something inside their hearts.

Yes. If only they express their feelings less on Social Medias and prove more of their feelings to crushes by their actions and behaviors. Action speaks louder than words, right?

You can observe them quite frequently too. Every couple has at least one BFF and he/she is a FA. These FAs usually accompany their friend’s couples whenever they go outside. Although they are FAs, they have been to almost all places that are popular among the couples, thanks to these kind couples. Among all FAs, these FAs are the most knowledgeable about the relationships mainly due to staying quite closed with the couples. Sometimes, they are not just third-wheel. They may be fifth-wheel, seventh-wheel, ninth-wheel. There are two types of FAs among third-wheel FA groups; those that envy their friends and want to have their own relationship and those that are just satisfied with hanging out with their friends’ couples.

Due to their sociable nature of hanging out with their friends’ couples, they have quite high percentage of finding bfs/gfs of their own too. Their friends’ couples could also assist to those FA friends by introducing their single friends to them too.

They are actually SKB/BKS (charming) FAs. This type usually pretends to be a FA although they may usually be surrounded by their secret admirers and crushes. However, these FAs are specialized in “chay-ing (not giving a f)” to them. Actually, it would be wrong for them to shout themselves as FA because they are not FA. They mislead people with the wrong definition of FA. The other FAs should make the group meeting and ban them from the FA group for their misuse of FA word.

Of course, yes. If only they choose one among their secret admirers and crushes. Their only problem will be selecting whom to choose as their bfs/ gfs.

As funny as it sounds, these FAs are the most pitiful people too. It’s not that they try. In reality, they try way too much. The one they chase for gets chased by the other people too and these two become couples. The next one he thinks as “the one” becomes “the one of the other.” The more he targets, the more likely it is for those targets to become other people’s bfs/gfs. Despite their failure to land any guy/lady, they never give up. They persist. Yet, they still fail.

Some of these FAs believe that the more they target, the higher chance it is to find a bf/gf. On the other hand, some argue that those FAs can have bad reputation in the community and it might hinder them from succeeding in getting into a relationship. Both of these may be true. However, these FAs would also need a strategy to attract guys/ ladies so that their targets do not become the possession of other people.

It is not exactly their faults for being FAs. When they were young, they were brainwashed by their parents like “Oh my son/daughter, you are so good-looking. There’s no doubt you will be surrounded by guys/ladies when you grow older.” Unknowingly, these poor FAs believe their parents flatteries and think they can actually get settled in a relationship when they grow old. To make matters worse, some parents even tell their children not to find bfs/gfs even when they are in the university and suggest them to just focus on their studies. Those obedient children listen to their parents’ words and some even think that their geekiness and nerdy behavior can attract anybody. No, that’s not how love works, nerd!

As long as they keep on believing in the fairytales by their parents, they will just be trapped inside these dream lands. Wake up, y’all. Face the reality and talk to the ones you like to increase your chance of escaping from FA life. You don’t want to sleep at night by hugging the banana trunk, right?

So, what type of FA are you? Please let us know in the comments.

I love writing, and that's it. :) View all posts by zawyenai